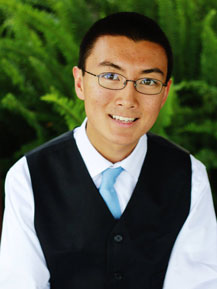 Getting lost in the news cycle is something student journalists struggle with. The amount of negative news that exists is enough for people to unmotivate themselves from keeping up with current events at all. But, Pepperdine journalism students learn to keep their eyes out for a good story. 2018 alumnus Bryce Hanamoto had a tendency to find and cover good, heart-warming stories like a surfing dog contest or getting an interview with Santa Claus (from the Topanga mall). Not only that, but he's learned that being equipped with the right technology makes telling the story easier and more effective and that's a skill he sharpened at NewsWaves.

Q: Where are you from?
A: I am from Temple City, California.

Q: What made you choose Pepperdine?
A: I knew I wanted to attend a small school where it would be easy to get involved with the television news program. I also wanted to stay in California because of the nice weather. In the Malibu area there is a good amount of news that is reported nationally, so coming to Pepperdine gives me the opportunity to report on some big stories.

Q: Why did you choose journalism as your major?
A: I've always been interested in learning about what is happening around the world. When I was younger, each morning and evening I would choose to watch the news instead of another television show. Broadcast journalism is a creative way for me to tell stories about people and events happening in the community using my love for writing and video making.

Q: What's a unique experience you've had by being a student journalist?
A: I have been able to report on interesting events and speeches such as when California Governor Jerry Brown and former Vice President Dick Cheney spoke to Pepperdine.

Q: What have you discovered about what it's like being a journalist in the real world while at Pepperdine?
A: I have learned how many people it takes to produce a newscast. Normally we only think of the anchors and reporters we see on T.V. Additionally, I've learned that it takes a long time to write a news article or produce a newscast.

Q: How have you continued to be inspired by journalism despite the interesting place the industry is in?
A: Journalists are important today because they inform citizens, keep people in power accountable and they bring people together. I look forward to the challenges ahead. I have also been inspired to continue to pursue my dream by the speakers and Pepperdine alumni that the journalism professors have speak to the journalism classes. We have been able to hear from news reporters from across the country.

Q: What is something you have learned while doing journalism at Pepperdine that you hope to take into your career?
A: I learned how to finish assignments on a deadline and find story ideas and sources.

Q: Describe a time that you made a mistake in the learning lab (PGM or NewsWaves) that had a profound impact on you.
A: I sometimes forgot to attribute quotes and information when I first started writing for the Graphic. After getting experience writing news articles for the newspaper, it is something I learned I can never forget. 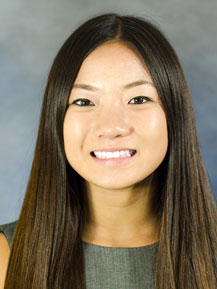 Student journalists at Pepperdine know that there's always something to learn, no matter how much previous experience they bring to the newsrooms. Jennevieve Fong discovered her passion for journalism in high school and continued to further her abilities through experiences at both Pepperdine Graphic Media and NewsWaves. Savvy with web and broadcasting technology and a knack for knowing how to cover news, she was able to run seamlessly between both newsrooms while wearing her trademark platform shoes.

Q: Where are you from?
A: I was born and raised in Burbank, California. Burbank has been dubbed as the "Media Capital of the World" with numerous entertainment and media companies headquartered there. Being around these companies sparked my interest in the entertainment industry from an early age.

Q: What made you choose Pepperdine?
A: I chose to attend Pepperdine University because I wanted to invest in a private institution with a smaller community focus so that I could receive the best hands-on education as possible. In addition, Pepperdine holds its students to a higher standard in the terms of purpose, service, and leadership. I knew that attending a university that does so would push me to become a greater student and person.

Q: What's a unique experience you've had by being a student journalist?
A: As a student journalist, I have learned that working professionals are willing to mentor and teach you as much as possible. I have been lucky enough to have numerous internships with top media companies including Fox News Channel, NBCUniversal, The Hill Newspaper, SAGE Publications, and Sony ATV Music Publishing. In each of these internships, I have been able learn hands-on from leading media professionals in the modern industry.

Q: How have you continued to be inspired by journalism despite the interesting place the industry is in?
A: The current climate in the journalism industry is problematic. Instead of focusing on the important issues, media outlets are targeting each other. But what continues to inspire me is knowing that we are the generation of change. The issues that we are facing now were not the issues we were facing 50 years before and will not be the issues we face 50 years from now. I have full confidence in myself and my peers to change the world of journalism back to what it was before.

Q: What is something you have learned while doing journalism at Pepperdine that you hope to take into your career?
A: During my time at Pepperdine, I have made it a point to become a well-rounded journalist. While my primary interest is in broadcasting, I continued to practice print and digital journalism through Pepperdine Graphic Media. While it is important to find a specialty, it is just as important to be well-rounded. As a modern day journalist, you need to know how to do it all (report, write, and edit) on all platforms.

Q: Describe a time that you made a mistake in the learning lab (PGM or NewsWaves) that had a profound impact on you.
A: In the world of live television broadcasts, anything and everything will go wrong. What I have learned from my mistakes is that you need to be able to think on your feet and find the next solution. The best way to prepare yourself is to always plan ahead and look forward.

Great television news reporters run under pressure to create interesting, well-researched reports all while keeping a certain sparkle about them. Emily Tencer has the sparkle, the effervescence of a news reporter committed to telling important stories to her community while maintaining her composure on screen--no matter how crazy the story gets or how many technical difficulties could happen. At Pepperdine, that sparkle fed a passion for honest reporting and a passion for helping her community through journalism.

Q: Where are you from?
A: I am from Papillion, Nebraska.

Q: What made you choose Pepperdine?
A: I chose Pepperdine for its academic reputation and Christian influences - along with it's location and close proximity to the beach, of course.

Q: Why did you choose journalism as your major?
A: I chose journalism because I love being able to tell real stories that are influential and important for the community to know.

Q: What's a unique experience you've had by being a student journalist?
A: One time I was able to help cover an Air Force captain returning home from deployment to surprise her daughter at her daughter's graduation. It was a very sweet moment that I'm glad I was able to not only witness, but help the mother capture.

Q: What have you discovered about what it's like being a journalist in the real world while at Pepperdine?
A: I've discovered the importance of everybody's roles in the newsroom. Although viewers only see the reporter or anchor, so many people are behind the scenes gathering and shooting information, making sure the production runs smoothly. Those working behind the scenes make the production look easy to those who don't know the chaos behind the camera.

Q: How have you continued to be inspired by journalism despite the interesting place the industry is in?
A: One thing I love about news is waking up everyday wondering what assignment I'll be sent out on, what I'll be seeing, who I'll be interviewing. It's a profession you can never get tired of, or expect what will happen. It keeps you on your toes and keeps you alert.

Q: What is something you have learned while doing journalism at Pepperdine that you hope to take into your career?
A: The most favorite thing I learned in the Pepperdine journalism program is journalism ethics. I remember feeling so proud to attend a school with morals and ethics, teaching us the importance of capturing a story without crossing the line, as some news stations do. Pepperdine taught me it's okay to say no to things I'm not comfortable with, and stand up for myself to not participate in stories and situations I don't feel is morally right.

Q: Describe a time that you made a mistake in the learning lab (PGM or NewsWaves) that had a profound impact on you.
A: One of my biggest mistakes I made would be becoming too reliant on scripts and Teleprompter. I'm a fine public speaker, but it would seem I wasn't when the prompter would glitch and I had nothing to read off of. I learned to really know the stories I was telling, to know them enough to be able to tell them from the top of my head. I learned to be confident in my training to look at the camera and be comfortable in knowing what I was talking of, without any script.

Q: What do you hope to pursue in your career?
A: I hope to pursue a career in the media - whether that be news, TV, film, or writing. Ideally, I hope to host morning news shows or talk shows.