Prior to attending Pepperdine, I had no idea of what career path I wanted to follow. I remember looking at the list of majors two weeks before the start of my first year and praying for a sign of what I should select.

All I knew was that I didn't want to have a desk job where I would do the same thing from 9 to 5 every day. I wanted something exciting and challenging, where I would meet new people, be on my toes, and be passionate about my work.

After reviewing each major Pepperdine offered, a photo of a student in a control room caught my eye. I had no idea how a control room operated or what the student in the picture was doing, but I knew that if I studied media production, I would be getting experience in a hands-on, dynamic career.

Starting the media production program with no concept of what the major entailed, I was intimidated. It seemed that all of my peers had prior experience in film or television, and I was overwhelmed by how much I had to learn.

As I took more courses for my major, I learned about Pepperdine's locally airing, student-produced shows. Eager to work on live television, I contacted my academic advisor, who helped me get a job working on the student-led program Good Morning Malibu. 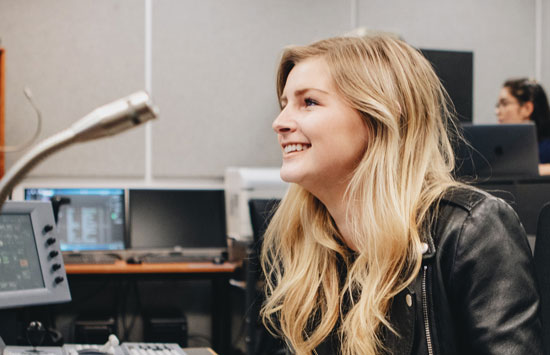 I joined the Good Morning Malibu team my junior year as a video editor. In that role, I sourced video clips online, edited, and encoded them to be in the newscast.

As the year progressed, I wanted to further my involvement with the show and acquired the role of assistant director. During my second semester, I took the studio production course that is required for all media production majors at Pepperdine.

The studio production course remains my favorite thus far at Pepperdine. I was able to learn how to direct live television from Joel Tator, an award-winning news director who has won over 25 Emmys. The class made me even more passionate about the excitement of live television and led me to take on the role of director for Good Morning Malibu my senior year.

I feel very privileged to have been able to have had so much hands-on experience in the control room and studio and to be able to apply what I've learned in class to a live television show. These opportunities have allowed me to get a better understanding of what my future career entails and make me excited and confident for what my career will bring post-graduation.

One of the aspects of studio production at Pepperdine that I love most is the community. Both the studio production course and Good Morning Malibu require a great deal of collaboration. It takes a lot of people to make a show run smoothly, and you get to know the people you work with well as you manage the intensity (and hilarity!) of live television together.

The control room now feels like a second home to me. My time there has given me incredible memories, and I've had some amazing experiences over the last couple of years. Live television is where I have found my niche, and I'm so excited to see where my unique experiences at Good Morning Malibu will take me in the future.