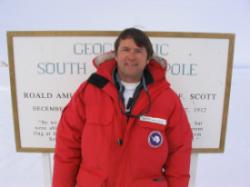 Pulitzer Prize winning historian Edward J. Larson is the author of ten books on topics in the history of science or exploration. His latest book, An Empire of Ice, deals with science during the heroic age of Antarctic exploration, which culminated 100 years ago in Robert F. Scott and Roald Amundsen reaching the South Pole within five weeks of each other. Displaying remarkable planning and execution, Amundsen's party returned safely and quickly. Scott and his men died on their long struggle back. Initially lionized as a tragic hero, Scott is now widely portrayed as a Victorian bungler whose vanity and poor planning doomed his party. Without excusing Scott's mistakes, this lecture (which is scheduled for 100 years after Scott’s death) seeks to restore some balance to his image by looking at the role of science in his polar expeditions. Scott may have been trying to do too much on his expeditions, at least as compared to the single-minded quest for the pole that propelled Amundsen's expedition, but they nevertheless left a lasting legacy in Antarctic scientific research and discovery.