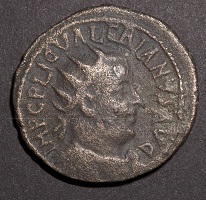 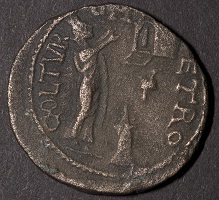 A Coin Minted in Tyre Under Emperor Valerian

An excerpt from Jack Miller's and Brittany Piwowar's poster (pictured below): "Publius Licinius Valeriannus Augustus was the Roman Emperor from 235-259 AD. In 257 AD, he commanded Christians to either perform sacrifices to Roman gods or be banished. The following year, he increased his severity when he mandated the execution of Christian leaders and ordered Christian senators and knights to perform acts of worship to Roman gods in order to retain their titles. Those who disobeyed were sent into slavery. Perhaps most famous for his downfall, Valerian was the only Roman Emperor to be captured as a prisoner of war, detained in confinement and publicly humiliated until he was eventually killed in captivity. Valerian is depicted as wearing two types of crowns throughout his reign: the corona crown and the laurel wreath crown. The bust of this coin portrays Valerian in a corona crown which was designed to reflect the corona of the sun (the outer layers of the flames that spike out like a crown). The corona crown was significant because it was a display of power and authority and is only worn by emperors in Roman coinage.

The reverse side of this coin depicts the founding of Carthage as recounted by Virgil's novel-length poem, The Aeneid. According to the poem, Dido (a Phoenician princess) fled her home after her brother murdered her husband and founded Carthage. Prior to leaving to found Carthage, Dido made a sacrifice at the temple of Hercules which is in the city of Tyre. The Murex shell depicted in the middle of the reverse side of the coin represents the purple dye for which the city of Tyre was known. Tyrians credited their god Hercules with the discovery of the precious dye. Their legend tells of Hercules' sheepdog biting into shellfish which left a bright crimson stain in the dog's mouth. Hercules then ordered his gown to be dyed with the new-found color. The Tyrians honored Hercules for giving them this desirable product by building a temple in his honor. The temple of Hercules is depicted on the top of the reverse side of the coin and is identifiable by Hercules' club in the doorway. The Hercules of Greek mythology was the original god of the Tyrians, so naturally he would be included on a coin minted in Tyre." 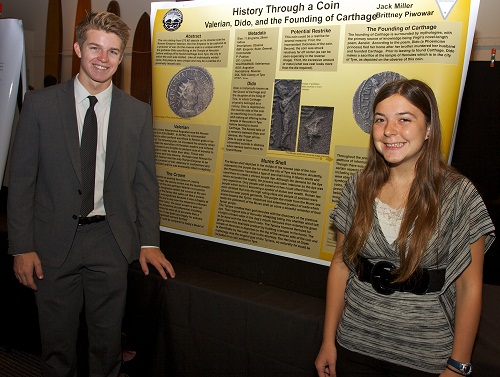