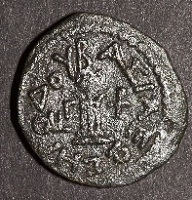 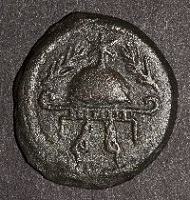 A Coin Minted Under Herod the Great

An excerpt from Elizabeth Chau's poster (pictured below): "This bronze coin was minted in Samaria under Herod the Great. Client rulers could not mint coins with silver or gold. The obverse of the coin has the words "BASILEOUS ERODOU", or "belonging to King Herod", in Greek. There are no letters in Hebrew, which is significant because this demonstrates the overall Hellenistic reign of Herod. Also on the coin is the year 3, which provides an indicator of the time the coin was minted, year 3 of Herod's reign, or 37 BCE. The writing begins near the middle of the coin at "B" and continues in a circular direction ending at "Y". Additionally, in the center of the obverse is a tripod and a ceremonial bowl called a "lebes". This was used as a decoration in the Jewish temples. The presence of this Jewish object shows Herod's attempts to respect the Jews and avoid conflict as well as the lack of a face on the coin, as a face on a coin would symbolize idolatry to the Jewish people.

On the reverse of the coin at the very center is a Dioscuri cap, with a star on top, resting on a table. The Dioscuri were twins who were the Greek gods of horsemanship and were believed to aid in the escape of a storm. The Dioscuri were often pictured with such a cap and the appearance of a Greek symbol such as the Dioscuri cap provides further evidence of King Herod's Hellenistic rule. This is a point conflict with some scholars as some believe that the center object is a military helmet, however, I believe the Dioscuri cap theory is more probable due to the appearance of very similar Dioscuri caps on other coins of the same time as well as the appearance of a star on top. The cap is flanked by a palm branch at each side, which represents victory. During this time of Herod's reign he had just been re-crowned king by the Romans and illustrates his value of power. Because he was only a client king he often had to prove himself to the Romans and was paranoid that his power would wane. Such symbols appear on the coin because Herod wants to show that he is a victorious king to both his subjects and to the Romans." 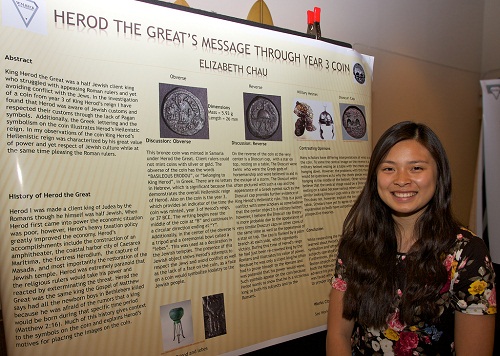