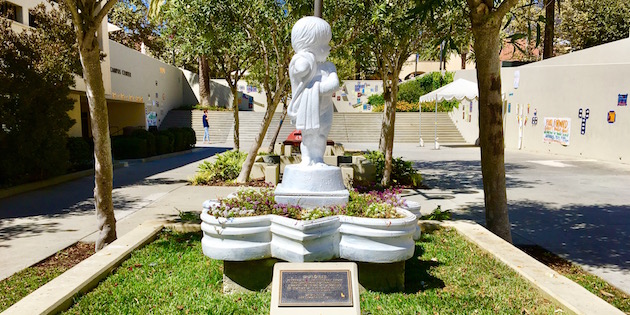 As GPC alumni well know, long before Willie the Wave, the unofficial icon of the Pepperdine community took the form of a demure two-year-old girl carved in stone and placed atop the fountain that marked the heart of the George Pepperdine College campus in Los Angeles. Shortly after she appeared in 1941, students dubbed the statue "Dolores," reportedly after the Frank Loesser song of the same name made a hit that spring by Frank Sinatra.

Over her 50-year history in the Pepperdine spotlight, the college grew and changed around her, and Dolores changed too. The reverence bestowed upon her by the students meant that she was the focus of rituals (decorating, dressing, or painting her), but also pranks (she was stolen several times and occasionally damaged). Suffering one too many abductions, the original Dolores stepped aside for a newer model in 1967; her hands now resting together on her hip, having apparently dropped her signature towel.

After Seaver College opened in Malibu, Dolores remained on the Los Angeles campus for a decade before finally making the move to Malibu in 1982. She was given a place of honor near the center of campus, where she endured the tough love of a new generation of Pepperdine students. Then, sometime in the late 1980s, she failed to return from one of her many disappearances. The era of Dolores appeared to have come to an end. Until now.

In honor of Pepperdine University's 75th anniversary, Dolores was bravely returned to the Malibu campus! Thanks to the efforts of GPC Alumni Affairs, Construction and Campus Planning, and President Andrew K. Benton, the new Dolores revived her original 1941 form, taking her place near the Tyler Campus Center; quietly braced for the next chapter in her long history.