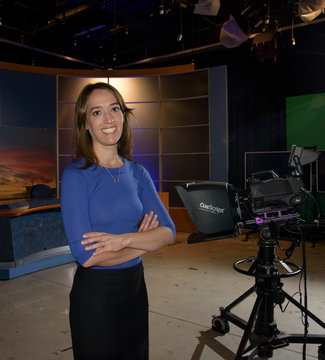 Theresa de los Santos is an assistant professor of communication in the Communication Division at Pepperdine University in Malibu. She obtained a bachelor of arts degree in broadcast journalism and political science and a master of arts degree in media communication from Pepperdine. She earned her PhD in media communication at University of California, Santa Barbara. She is an Emmy award-winning television news producer, formerly working at FOX 6 in San Diego and on the FOX 11 Morning News and Good Day L.A. at KTTV in Los Angeles. As a news producer she covered Hurricane Katrina, the Malibu wildfires, and the immigrations protests of 2006, which made her step back and question the impact of the language used in news messages on audiences. As a result, her research focuses on the effect of discrete emotions in news coverage on attitude, opinion, and behavior change. At Pepperdine she teaches in the areas of journalism, media, and research methods and leads the broadcast co-curricular programs.