Immediately after the Woolsey Fire, Pepperdine faculty and students began research to deeply understand plant regrowth in the landscape. Student researchers in the Summer Undergraduate Research in Biology (SURB) program pushed these inquiries further and found critical shifts in the plant life in the Santa Monica Mountains and on Pepperdine’s campus, including localized extinction of one species and weakened plant immune systems of another. 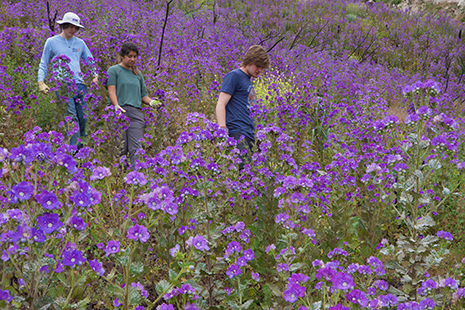 The natural landscape of the Santa Monica Mountains is dominated by diverse species of woody shrubs, also known as chaparral. Wildfire is a necessary phase in the life cycle of chaparral plants. Some species, such as Greenbark Ceanothus, are considered  “fire followers”—they need wildfire heat to germinate seeds and replenish nutrients in the soil. Mari Irving, SURB researcher from the University of Central Florida, explained that the most beneficial fires for chaparral plants burn hot to eliminate invasive weed seeds. Evidence of a lack of heat from the fire appears along the edge of the Drescher Campus, which is now a sea of invasive weeds that have grown nearly six feet tall. Just a few steps further into the hillside, the fire burned hotter, and the weeds yield to soft soil and the colorful blooms of the native plants. As the hillside regrew, the indigenous plants appeared to be thriving with virtually no challenge from invasive species, but student researchers found there was more happening underneath the blooms. 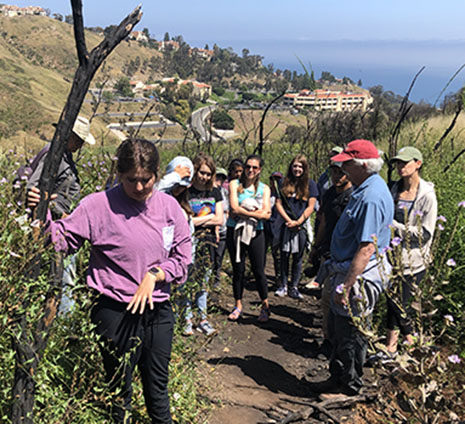 Karagan Smith, a rising senior at Seaver and SURB participant, has worked with her faculty mentor Dr. Stephen Davis, distinguished professor of biology, since her first year. She is no stranger to the landscape, and she quickly noticed one plant missing from the resprouts and seedlings. Commonly known as Big Pod Ceanothus, the once prevalent, indigenous plant is now experiencing localized extinction due to increased wildfire frequency. The patient plant needs at least 10 to 15 years of growth to accumulate seeds in the soil. Only one of the plants, which narrowly survived the 2007 wildfire, matured long enough for one seedling to sprout post-fire.

If seedlings and resprouts succeed in the landscape, they also face stress from an entirely different species, an opportunistic fungus. Juan Aguijo, SURB participant from the University of Arkansas, paid close attention to this fungus. Aguijo noted that though the woody plants of the chaparral are drought tolerant, years of chronic drought has made them susceptible to the fungus, which strips the plant of the resources needed for survival.

While the landscape is typically resilient, the student researchers shared concerns that many native species may be unable to survive due to increased stress from chronic drought, infection, and increased fire frequency.  On June 24 participants shared their research and methods with climate researchers and activists from the University of California, Los Angeles. Their projects were featured in the SURB symposium and poster session on July 17 and July 18.

The SURB program is an intensive research program funded by the National Science Foundation and led by faculty from the Natural Science Division of Seaver College. Undergraduates interested in pursuing a career in biological research, science education, environmental science, or biotechnology are chosen from universities across the nation to complete independent research projects. This summer’s research achievements were made possible by the following SURB student participants and faculty mentors.