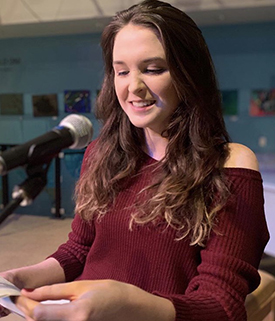 “It was inspired by the idea or fear that we all have of becoming like our parents,” shares McCollum.

McCollum is a senior studying creative writing in the Humanities and Teacher Education Division at Seaver College. She is anticipating graduation in May 2020 and preparing for graduate school to pursue screenwriting.

Sigma Tau Delta is an International English Honor Society that celebrates the achievements of the top 30 percent of their class. The Eta Psi chapter at Pepperdine University hosts fundraisers for the Rare Book and Special Editions display in Payson Library.