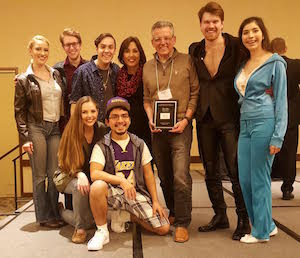 The Opera Division I award is reserved for productions featuring performers between the ages of 18 and 22, and is thus primarily granted to undergraduate students. Other national finalists for the award were students from Samford University, Central Washington University, and University of Nebraska Omaha. Finalists were selected by blind video submission.

“While being the most important aspect to the performers, people tend to lose sight of the teamwork and unity needed to put on an inspiring performance,” explains Papandrea. “Often the person who ‘shines’ the most may get the most credit, but it is all the work beforehand, from each and every person involved, that truly makes the scene come to life.”

“I was unbelievably proud of them the whole time,” says Price. “They’re so exuberant, charming, and humble. They are great students, and I think they were the hit of the whole conference because everybody liked them so much both in their performance and personally.”

Sophomore Soibelman and alumnus Rudy Giron (’14) were national finalists at the Vocal Competition held at the event. Giron also received the “Legacy Award,” a special award presented to the leading minority student in the competition.

The Opera Program’s complete production of Don Giovanni will be presented at Smothers Theatre on the Pepperdine University Malibu campus on Thursday, February 23, and Saturday, February 25, at 7:30 PM.

For additional information about the upcoming performances, and to purchase tickets, visit the Center for the Arts website.