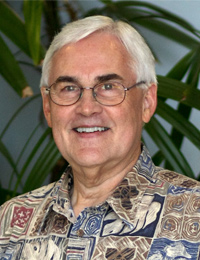 Pepperdine University is saddened to announce the passing of Milton J. Shatzer, professor emeritus of communication at Seaver College.

Shatzer served as an elder at the University Church of Christ until 2011. He and his wife, Nancy, who has served as an internship coordinator and industry specialist for Pepperdine’s Career Center since 1999, were devoted to their faith and served as missionaries in Nazareth.

A memorial service has been scheduled for Wednesday, January 3, at 2 PM at Elkins Auditorium on the Malibu campus, followed by a reception. In lieu of flowers, the family requests that gifts be made in Shatzer's memory to the Dr. Milt Shatzer Memorial Scholarship.