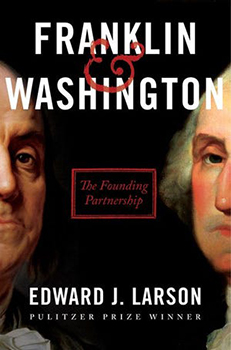 Larson’s book sheds light on the collaborative relationship forged between two of the United States founding fathers. Although Franklin and Washington were markedly different in age and lifestyles, Larson’s juxtaposition of the two shows how the two were connected in more ways than initially thought. The dual biography tracks their stories both independent from each other and as they connected to forever shape America’s institutions.

Larson has received several notable awards and honors including the Pulitzer Prize for history in 1998. He joined the Pepperdine faculty in 2006 and has taught students history at Seaver College and Caruso School of Law. As a popular public speaker, he has taught in all seven continents and is frequently featured on media outlets including PBS, BBC, and NPR.

To register to attend the event, visit the Pepperdine Libraries website.