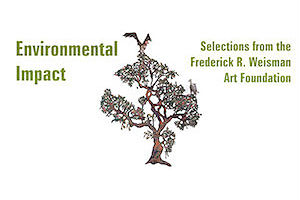 "Environmental Impact: Selections from the Frederick R. Weisman Art Foundation," an exhibition showcasing original art in various mediums inspired by our natural world, will be on view at the Frederick R. Weisman Museum of Art at Pepperdine University from August 26 through November 30, 2014. A reception will be held Saturday, Sept. 13, from 5 to 7 p.m.

Since the dawn of time, artists have been inspired by nature. This thought-provoking exhibition features work by a diverse group of contemporary artists who comment on our relationship to the natural world. Their art reveals the complex ways nature functions in society. While some see it as a source of delicate beauty, others view it as an overwhelmingly powerful force. Regardless of their perspective, artists today understand that our relationship to nature is delicate, complex, and interconnected. Over 35 large-scale works fill two floors of the Weisman Museum with various meditations on one of the most pressing issues of our time.

A key work in this exhibition is Ed Ruscha's LAX - Sunset – Malibu (1981). Three place names, rendered with the artist's signature use of typography, allude to the drive up Pacific Coast Highway from the airport to Malibu. But instead of showing scenic views, the landscape is shrouded in thick gray smog. Ruscha's witty and poignant image reminds us that through much of the 20th century, Los Angeles held the unfortunate distinction of being the smoggiest city in the nation. Another work on the theme of air pollution is Joe Goode's Torn Sky (1979). A canvas painted a smoggy gray is literally ripped to shreds revealing another canvas painted with a bright blue sky underneath. This humorous but poignant work reminds us of the extent to which we can destroy our environment—and possibly repair it.

Another side of nature is seen in Wave (2009) by New Orleans artist Srdjan Loncar. A massive eight-foot tall sculpture of a cresting wave towers over the viewer. This monolithic mass is covered with hundreds of photographs of water, depicting various oceans, lakes, rivers and streams. This work reminds us that bodies of water do not exist as isolated entities but are all part of an active, interrelated, worldwide network.

New York painter Andrew Piedilato views the ocean as a source of floating mystery and potential chaos. Two large-scale, 10-foot paintings depict the seas as a setting for cataclysmic events. In Submarine Surfacing (2010) a submarine violently emerges from the depths, shattering the peace. In Whirlpool (2011) a logjam of ocean debris alludes to a shipwreck but also to the fields of man-made garbage that float upon our oceans.

In Brethren of the Stone: Paul's Vision (Three Worlds Under a Mushroom Cloud Sky) (2006) New York based artist Jen Liu creates a futuristic fantasy world where nature and industry collide and intermingle. Adopting a format from traditional Chinese landscape painting, she creates a world within a world where elephants wear gas masks and smokestacks dance alongside smoking volcanoes. The title, which contains both religious and apocalyptic references, reveals the artist's belief that the fate of our environment involves both a religious and a material battle.

Our environment has historically been impacted by natural change on and within the Earth – by relentlessly evolving weather conditions, such as tornadoes, hurricanes, volcanic eruptions, tidal waves, severe winds, torrential rains, etc. Man has also added to the list of stimuli that has significantly affected the quality of the environment, with industrial pollution, manufacturing, automobile and airplane exhaust, plastics, paints, etc. Environmental Impact: Selections from the Frederick R. Weisman Art Foundation has gathered various examples of how artists have reproduced, commented and critiqued our ever-changing environment, whether the result of nature's forces or man's interventions. The exhibition brings together different approaches to the subject—both formal and conceptual—including commentary on pollution and natural disasters, and observing and altering the environment.

This exhibition was curated by Billie Milam Weisman and is generously funded by the Frederick R. Weisman Art Foundation.

For more information, visit the Center for the Arts website.