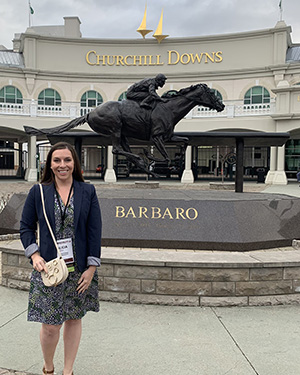 On March 6, 2020, associate professor of sport administration Alicia Jessop was appointed as the Sports and Recreation Law Association (SRLA) president-elect. The appointment comes after five years of actively participating in the association including previously serving on the association’s board of directors as the member-at-large overseeing honors and awards.

“I see this as a unique opportunity for my field because sport law is still emerging. It is an honor to be at the helm of this organization driving the strategy and the conversation about where law goes,” says Jessop. “I am excited to collaborate with peers across the world and bring it all back to the classroom at Pepperdine.”

At the association’s annual conference in Louisville, Kentucky, members shared their nominations and confirmed Jessop as the president-elect during the awards banquet at Churchill Downs. The position serves a three-year term and leads the association through years of growth and advancement of sport law pedagogy.

Jessop is a licensed attorney whose research focuses on the intersection of sport, business media, and law. She has also followed female and minority leadership in intercollegiate sport governance at the NCAA Division I level as well as female representation in sports reporting. Beyond presenting her research at several conferences, she has published numerous articles across the Washington Post, Forbes, and The Athletic. She also frequently appears on television and radio to provide commentary and analysis on sport law and business.

The SRLA aims to further the study and dissemination of information regarding legal aspects of sport and recreation. With its diverse members from different educational and experiential backgrounds, the Association serves academicians and practitioners in private and public sport and recreation settings. To learn more about the association, visit the SRLA website.