Back to the Past: Dr. Lisa Smith and the Genesis Lab Innovate New Virtual Reality Assignment | Newsroom | Seaver College Skip to main content

Back to the Past: Dr. Lisa Smith and the Genesis Lab Innovate New Virtual Reality Assignment 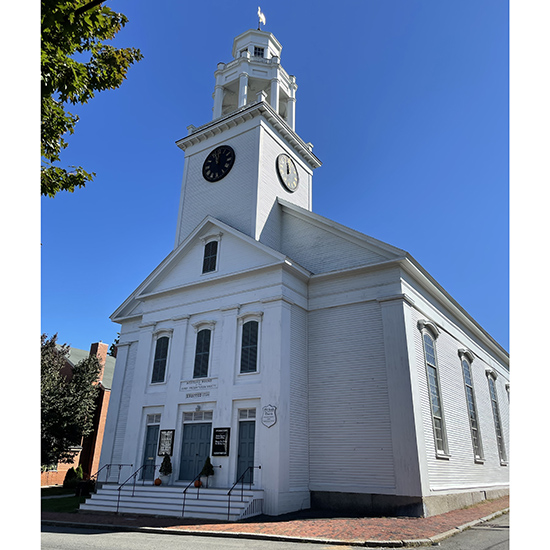 Dr. Lisa Smith does things differently. Whether it's her final exam, which calls on students to create a playlist of contemporary music related to a novel, or an assignment that pushes the course content outside of the classroom, Seaver College’s assistant professor of teaching of English does not go by the book.

“A lot of students dislike taking a 300 level literature class,” Smith admits. “Many of them haven’t had literature since high school. So I try to do things that are fun and different.” 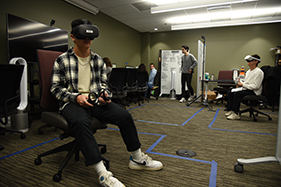 Driven by this challenge to innovate, Smith collaborated with Payson Library’s Genesis Lab to create an immersive assignment for her ENG 380 class entitled, Passion and the Pen: Documents of the First Great Awakening. Given the dense and focused nature of this topic, Smith sought to incorporate new and exciting technology into her curriculum. Thus, she came up with an idea to seize her students’ attention – a virtual reality experience of George Whitefield’s Great Awakening speaking tour.

“Under no circumstances did I think I could actually get this done,” says Smith. “But I was like, ‘Well, maybe the Genesis Lab will help me, and we will just keep taking steps and see if it happens.’”

Six months, two trips to the east coast, and many, many steps later, Smith and her collaborators unveiled their creation – a 9 minute Oculus Quest portraying the grounds and churches where Whitefield was likely to have spoken during the First Great Awakening. Accompanying the experience was a narration of one of Whitefield’s sermons, which played alongside the moving images.

“One thing that was true of the First Great Awakening, is that it was a movement that was held together in many ways by the Reverend George Whitefield,” explains Smith. “In 1739, he came here for a 15 month preaching tour, and he literally traveled up and down the eastern seaboard… His style was very innovative… He shared a lot personally. He published his spiritual journals, which was unique at the time. People got an inside look at his spirituality, and they felt like they kind of knew him.”

Wanting to grant her class a similar degree of intimacy, Smith and her family traveled to Pennsylvania and Massachusetts with a 360 camera. There they shot footage in fields, cemeteries, churches, even the burial grounds of Whitefield himself. 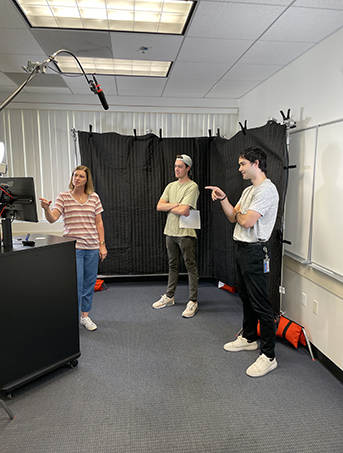 Next, she recruited a Seaver College theater student, Coby Rogers, to record one of Whitefield’'s sermons. Then, the video and audio were handed off to Genesis Lab staff, and Lauren Haberstock and Rankin Bullard edited the raw footage with the narration into a virtual reality format.

Yet, the creative process did not end there. Smith went on to collaborate with Haberstock and Bullard to create a well developed, robust assignment, which utilized multiple facets of the Lab. Beyond the Oculus Quest, students also used the Cricut (an automated cutting machine) and Tinkercad (a 3D modeling program) in order to complete the accompanying assignments.

What originated as a fun idea to immerse students in the world of the First Great Awakening grew more dynamic with time and teamwork. Although Smith catalyzed this assignment, she claims that the Genesis Lab deserves just as much credit for the project's final form.

“I feel like [the Genesis Lab] is underused,” Smith claims. “In terms of being a resource, it offers something that I can’t offer in the classroom. It’s so different from a classroom space that it can be interesting; it can provide variety; it can allow students with other skills to use those abilities.”

However, don’t take her word for it. Instead, listen to her students, who responded to the Genesis Lab project with reviews such as:

“In so many other classes, we are forced to memorize a multitude of items for a big exam at the end of things. There’s no application, and to be completely transparent, it’s not that fun or enjoyable,” says one student. “However, this project allowed us to apply the material we learned in class in such a way that was engaging and entertaining.”

“I found the Genesis lab to be extremely fun and engaging compared to anything I have
ever done in an English class,” exclaims another.

And lastly, “I felt that this creative approach to engaging with the material was fresh and provided a more valuable experience than merely completing a research paper or similar assignment.”

All of this – the idea, the execution, and the results – combine to highlight the winning formula that Smith discovered in her efforts. It takes a dedicated educator, a collaborative and innovative partnership, and students willing to engage with a creative and unique class structure in order to foster a successful, new learning experience.