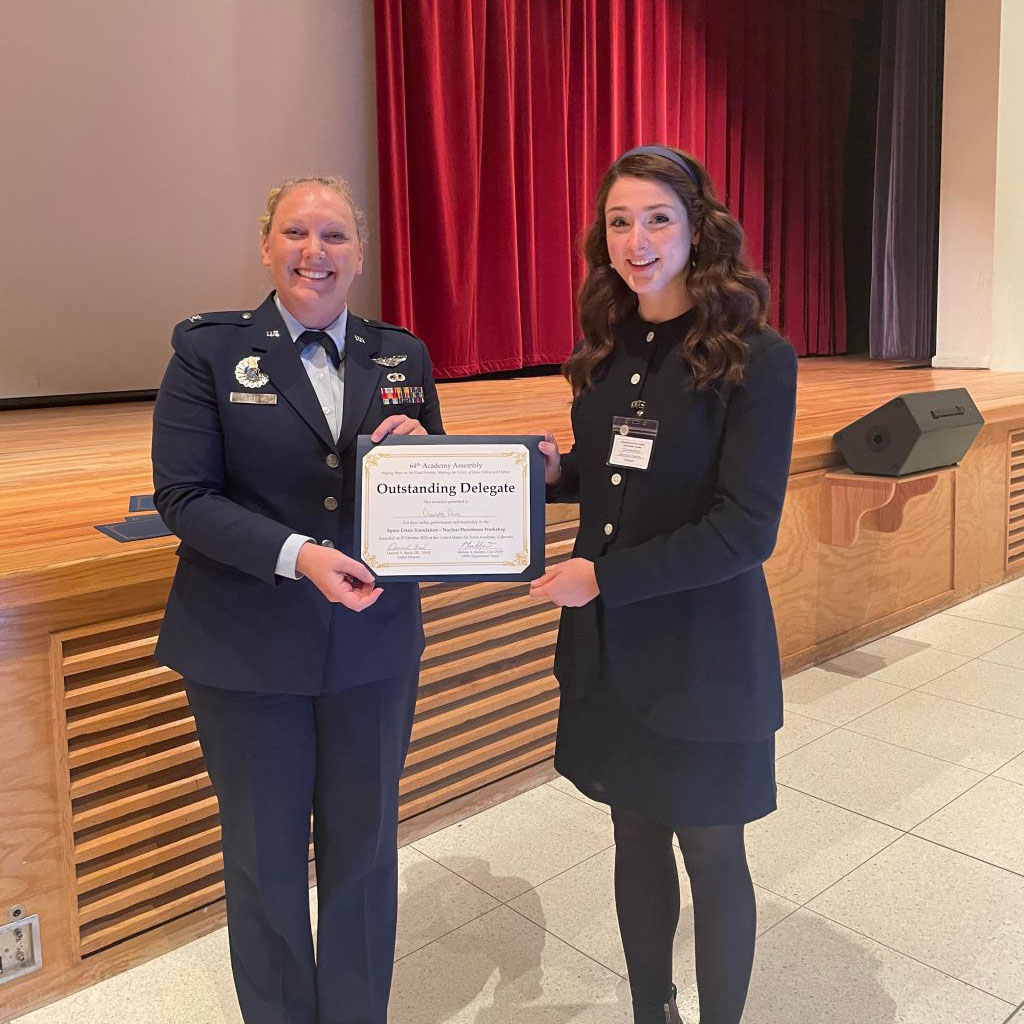 Charlotte Davis, a Seaver College senior, was named an Outstanding Delegate at the United States Air Force Academy’s 64th Academy Assembly, which focused, this year, on the concept of space policy and how it relates to defense. Davis was specifically honored for her contribution to the nuclear deterrence simulation.

“It was definitely an honor to be able to represent Seaver College at the 64th Academy Assembly,” says Davis. “It was amazing because I was there alongside people from MIT and Harvard. To be able to win the outstanding delegate award for Pepperdine, being the only Pepperdine candidate present, was very special.”

At the conference, 300 student participants maneuvered through a series of eight different workshops, which each presented a simulated obstacle to be overcome. Students were asked to work together to problem solve whatever scenario was introduced. Davis and her group faced a space crisis simulation based on nuclear deterrence. Together they were charged with solving a series of space-based nuclear concerns. This prompt allowed Davis to utilize her prior knowledge concerning space law and resolve the issue with a treaty.

“The simulation aligned with my International Organizations and Law course that I’m in right now,” explains Davis. “At Pepperdine, many people are aware of law as a discipline. Whereas most people at the conference were engineers or military personnel. It was fascinating to be able to bring something to the table that was nuanced.”

Davis claims that this nuance stems from her educational focus in International Studies and Law at Seaver College. She cites these two emphases as preparatory and instrumental in her success within internships and extracurricular activities outside of the classroom.

The International Studies program at Seaver College pushes its students to engage with various opportunities outside of the normal course load. In this instance, Davis was one of three IS students selected to represent Pepperdine University in the U.S. Military academy conferences.

“Charlotte is extremely curious and wants to get into the details, and she’s very articulate,” comments Felicity Vabulas, an assistant professor of International Studies at Seaver College. “Once she’s figured out a challenge, she does an excellent job communicating and thinking on her feet.”

These skills helped distinguish Davis for the opportunity to represent the University at the conference. Yet, it was Davis’s past experience with the Department of Defense that pushed her toward the Air Force Academy’s specific session.

During her time studying at Pepperdine’s Washington D.C. campus, Davis received the chance to work on multilateral and bilateral agreements concerning which technologies the American government shares with its allies. This process exposed the Seaver student to each military branch and allowed her to develop interest in the U.S.’s air defense.

Following her success at the 64th Academy Assembly, the Air Force Academy invited Davis back to another conference taking place during February of 2023. The Seaver College senior hopes to use this event to network for a future career; however, beyond this, Davis is a semifinalist for a Fulbright Scholarship in Austria. She has also applied to Georgetown University’s School of Foreign Service.