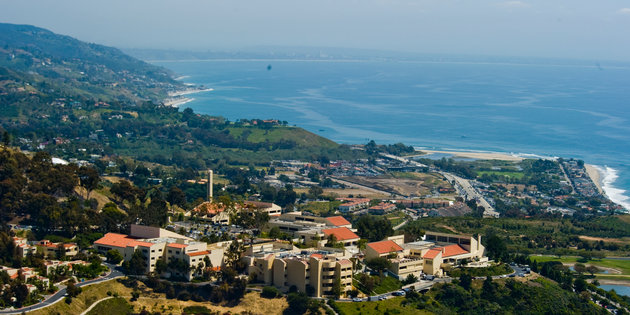 On September 21, 1937, the new campus of George Pepperdine College hosted 2,000 attendees gathered to witness the opening of the school. Speakers that day included California governor Frank Merriam, Los Angeles mayor Frank L. Shaw, the college's first president Batsell Baxter, and founder George Pepperdine. Among the crowd were the college's first students, 167 young men and women from 22 states and two foreign countries. Mr. Pepperdine clearly stated his intentions for the school on that day: "Our college is dedicated to a twofold objective: First, academic training in the liberal arts . . . Secondly, we are especially dedicated to a greater goal—that of building in the student a Christ-like life, a love for the church, and a passion for the souls of mankind."

The campus was located in the Vermont Knolls area of Los Angeles, a few miles south of downtown; formerly it had been a 34-acre estate with an 18-room mansion that had now been converted into the president's residence. Four buildings had quickly risen that year: Baxter Hall, the men's dormitory; Marilyn Hall, the women's residence; an administration building housing classrooms, offices, a library, and an auditorium; and a dining hall. The campus architecture was built in the Streamline Moderne style, and all of the new buildings were painted a light blue which was later marketed in Los Angeles paint stores as "Pepperdine Blue."

Pepperdine's school colors were adopted in 1937 after students voted to approve President Baxter's suggestion of blue and orange; blue representing the Pacific Ocean, and orange representing California. Baxter also recommended "Waves" as the name for Pepperdine athletic teams to differentiate from other schools' penchant for animal names. Even though the school was then miles from the ocean, it found approval and has characterized Pepperdine athletics ever since. During that first year, two students proposed Graphic as the name for the school newspaper as it contained the initials of George Pepperdine College (GPC), a name also continuing to this day.
In 1937, tuition was low relative to other schools, thanks to Mr. Pepperdine's initial endowment, with room, board, tuition, and fees amounting to $420. Those who today would be called "commuter" students were charged $135 for the year. By contrast, a hamburger and soft drink in the cafeteria cost 20 cents, a breakfast of eggs, hotcakes, and coffee, 30 cents.

The Baxter presidency was short by design, lasting only two years until his resignation in June 1939, but his brief tenure which took advantage of his experience in presiding over two other Christian colleges, David Lipscomb College and Abilene Christian College, was characterized by creating sound academic and administrative foundations and thoughtful traditions. During the college's first year of operation, only seven months after opening, Pepperdine received full accreditation from the Northwest Association, the regional accrediting authority. Baxter and dean Hugh Tiner, who succeeded Baxter as president, recruited a faculty of 22, of whom three held doctorates. And on June 6, 1938, after one year of operation, Pepperdine celebrated its first commencement awarding diplomas to a graduating class of four.
In Fall 1944, the college began offering its first graduate degree, the master of arts in religion. Even before the offering of the MA degree, Pepperdine had already served as a training ground for persons entering the ministry. Sixty young ministers were listed as enrollees in March 1944, and several alumni entered the foreign mission field following WWII.

In 1944, the 78th Congress passed the G.I. Bill subsidizing higher education and job training for returning WWII veterans, producing a profound, expansionary effect on higher education across America, in which Pepperdine College shared. Enrollments climbed from 824 enrolled in 1946, peaking at 1,830 in 1949. The following military conflict in Korea (which began in 1950) also affected American college male enrollment patterns positively due to the provision of college deferments in selective service. During this period the faculty grew from 67 (regular and adjunct) in 1946 to 116 in 1947. Number of degrees awarded annually at this time also swelled, with majors in business and education-psychology in the lead, topping out at 406 in 1950, eventually declining and stabilizing to approximately 200 a year through the mid-50s.

President Tiner went on medical leave early in 1957 and shortly thereafter resigned. That July, educator and pastor M. Norvel Young, who had formerly served the college as a history professor from 1938 to 1941, was appointed third Pepperdine president. Young, in addition to an agenda to raise the academic prestige of the college, was an exceptionally gifted networker and fundraiser during whose tenure was built an infrastructure of support that would enable the growing school to move toward its developing concept of being a multi-school university.

In the years from 1957 to 1966, enrollment at the college increased from 1,084 to 1,502. In 1958 the college began an extension program with course offerings at off-site centers which ranged geographically from North Carolina to the Philippines and Okinawa. This program's flexible scheduling was designed to allow military personnel to complete academic degrees heretofore impossible. Another Pepperdine innovation at this time was to establish a year-in-Europe program for upper division students in 1963. Thirty-six students were sent to the university in Heidelberg, Germany, in September of that year, under the supervision of then dean of graduate studies Howard A. White who would become Pepperdine's fifth president.

As the Los Angeles program continued to grow, the college proceeded to expand the campus by acquiring neighboring or adjacent properties to build out, but this process proved to be problematic and cost prohibitive, and the idea of operating in multiple campuses was explored and a committee was formed to investigate possible locations in Southern California. In October 1968, the college received a remarkable donation of 138 acres of undeveloped ranch land in Malibu, given by Merritt H. Adamson, Sylvia Rindge Adamson Neville, and Rhoda-May Adamson Dallas, for the construction of a new campus. Pepperdine announced its expansion plans at its celebrated "Birth of a College" dinner event on February 9, 1970, headlined by then Governor Ronald Reagan, and subsequently dedicated the Malibu property on May 23. Then Pepperdine vice president William S. Banowsky (later to succeed President Young in 1971) was installed as chancellor of the infant Malibu Campus.

In 1969 Pepperdine College reorganized the department of business into its separate School of Business and it accepted an offer to acquire the Orange University College of Law. It had been the first law school located in Orange County, and was operating as a for-profit night school in Santa Ana. Pepperdine College also had future plans to develop the department of education into a separate professional school (becoming so in 1971), and the trustees repurposed the Pepperdine organization and announced it as Pepperdine University on January 1, 1971. In October of that same year, the University organization was ultimately refined into two colleges of letters, arts, and sciences one located at the Los Angeles Campus and the other at the Malibu Campus, the School of Law in Orange County, and the School of Continuing Education, the Business School, the School of Education, and the Graduate School all at the Los Angeles Campus.

The First Wave at Malibu

The first students of the Malibu Campus entered school on September 6, 1972. Of that entering class of 867 were 475 freshmen, the largest beginning class at Pepperdine up until that time. Prior to their arrival, the construction, completion, and dedication of the Malibu campus buildings had proceeded in rapid succession, just in time for the start of school. The next year, 1973, saw the completion of two signature Malibu landmarks, Phillips Theme Tower and Stauffer Chapel.

At the Malibu Campus commencement ceremony on December 15, 1974, President William Banowsky announced that the liberal arts college at the Malibu Campus would be named the Frank R. Seaver College of Letters, Arts, and Science, after the memory of the husband of Blanche Ebert Seaver, the Malibu Campus' principal benefactor.

In the 1970s a spirit of optimism infused the Seaver College community as it received an increasing number of student applications, the number of faculty holding doctorates had risen to 85 percent, and the Graphic garnered several statewide awards. One unique, but very prominent source of national publicity began in 1976 when Seaver College became the filming location of the television show Battle of the Network Stars. It was estimated that 40 million viewers tuned in regularly and witnessed the beautiful seaside campus.

Shortly after Seaver College was dedicated, the trustees approved the relocation of the School of Law to the Malibu campus and groundbreaking began on May 22, 1976, with a ceremony addressed by U.S. Supreme Court associate justice Harry Blackmun. By August 1979, the three-story law center, named for benefactor Odell McConnell, was completed and occupied.

With the plant relocations to Malibu and West Los Angeles, Pepperdine University had solved its institutional problem of securing the physical space to fully realize its growth, and the principal project which faced fifth president Howard A. White, who succeeded Banowsky in 1978, was to begin securing the means for the University to commence building out to suit its academic purposes. White was a particularly astute recruiter and assembled an impressive team of academics, professional administrators, and fundraisers to accomplish this task. It was under the White presidency that the University embarked on its first nine-figure capital campaign, the "Wave of Excellence" campaign. The Wave of Excellence ultimately raised $137.8 million (far exceeding its $100 million goal) and its most visible benefit to the University was the construction of the five-story Charles B. Thornton Administration Center, the first building visitors encounter when entering the campus from the main gate.

For a University to seriously ask itself what and how to build, and to recruit the generosity of others to share in that program, as it did in this period, presupposes the existence of a well-articulated vision and a dream about the school's first principles. It is no mere coincidence that at this time President White deftly engaged the Pepperdine community in reconsidering its academic and spiritual purposes, which resulted in a formal reaffirmation of its connections to the Christian faith tradition and a succinct statement of its mission. In 1985 White effectively resigned from his appointment and worked with the Pepperdine regents (formerly trustees) in the year prior to eventually name successor David Davenport as sixth president of the University. In 2000, Andrew K. Benton was inaugurated as the seventh president of the University.