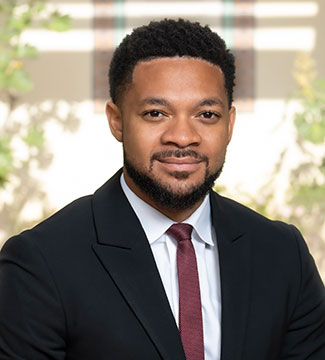 Stanley Talbert earned his PhD in Systematic Theology and African American Studies from Union Theological Seminary in the City of New York. Stanley is a Seaver Faculty Fellow at Pepperdine University. He received his master of philosophy ('19) and master of divinity from Union ('16), his BA from Pepperdine University ('12), and his AS from Southwestern Christian College ('10).

Talbert is the author of "Unveiling Radical Love: A Theological Reflection on Radical Love in the Age of Ferguson," in Reconciliation Reconsidered (Abilene Christian University Press, 2016). He has published articles on theology, race, and culture in the Journal for Religion, Film, and Media, The Huffington Post, Ebony, The Union Collective and the African American Lectionary.

Stanley is also the recipient of the Carl R. Holladay Award with the Christian Scholars Foundation, the Louisville-Institute Doctoral Fellowship, the Forum for Theological Exploration Doctoral Fellowship, the Seaver Faculty Fellowship, the Wittenberg Fellowship (Philipps-Universität Marburg, Germany), Union Theological Seminary's Hudnut Preaching Award, the Charles Augustus Briggs Award, and the Academic Excellence Award. His accomplishments in ministry and theological education have been featured in "Faith3: Active in the Head, Heart, and Hand," and Pepperdine Magazine. He began preaching at the age of nine. Stanley served as an assistant minister at Kings Church of Christ in Brooklyn, NY for five years (2011-2016).

Stanley Talbert is the graduate assistant of the Society of Study of Black Religion which is a society of the top black scholars of religion and theology in America. He served as the chair for Early Career Scholars section of the Christian Scholars' Conference, co-founder of Dikaiosune (organization focusing on social justice and faith), and a board member of the Justice League of Texas-based in Dallas. Talbert was a participant of the 2015 Millennial Leaders Project, where fifty young activists, leaders, and clergy across the United States were selected to engage social issues from the intersection of spirituality and social justice. He has given lectures and presentations across the nation as well as in France, Germany, Senegal, and South Africa.