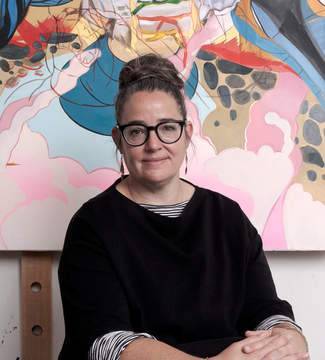 Gretchen received a BFA in Painting and a BA in German Language and Literature, from the University of Washington. In addition, she was invited to study at the Academy of Fine Arts in Dresden, Germany, where she studied under East German painter, Max Uhlig. In Spring 2009, Gretchen received her MFA in Painting from the Tyler School of Art, Temple University, where she also served as adjunct faculty in the summer of 2009. Gretchen went on to teach painting and drawing in visiting appointments at Denison University; Emory & Henry College, where she was also Chair of the Art Department; and at Roanoke College. Currently she lives in Malibu, CA where she is an Associate Professor of Studio Art at Pepperdine University. Gretchen's work can be found in both public and private collections both in the United States and abroad. She has also participated in national and international exhibitions including shows in Seattle, Philadelphia, Eisenstadt, Austria and Istanbul, Turkey. This summer Gretchen traveled to Istanbul, Turkey and Burgenland, Austria to participate in artist residencies.