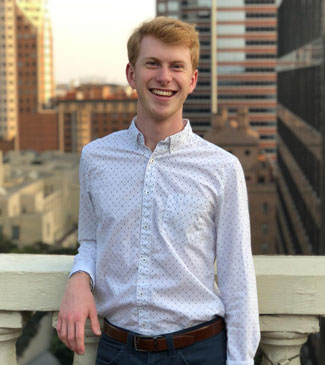 David Fraley, a recent graduate of the Pepperdine Music Department, is a pianist and music director in the Greater Los Angeles area. David grew up in Camarillo, CA and became involved with the music community in Thousand Oaks through his 10-year teacher Edward Francis. At age 14 he had his debut with orchestra, performing Rhapsody in Blue with the Thousand Oaks Philharmonic. He was invited to be a soloist with them on three future occasions. David began collegiate studies at Jacobs School of Music in Bloomington, IN and later transferred to Pepperdine University. He was a winner of the 2018 Thomas Osborne Concerto Competition, performing the first movement of Rachmaninoff's 2nd Piano Concerto. He was piano-conductor of "Big Fish" at Pepperdine (2017), and co-music director and piano-conductor of "Sweeney Todd" at Conejo Players Theatre (2019), for which he won Outstanding Musical DIrection from Four Star Theater Alliance. For four years, David has music directed Contempo, the Pepperdine musical theater ensemble. Aside from the proud work he does as a pianist for local churches, David currently gives private lessons and works as a choral and instrumental coach and accompanist.