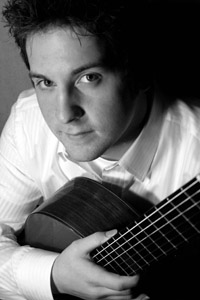 Jonathan Roth grew up in West Chicago, Illinois and started playing the guitar when he
was fourteen years old. He began his studies at the College of DuPage under Scott
Johnston, but after his freshman year, transferred to Pepperdine University. There he
studied privately with Christopher Parkening, who describes Jonathan as "a fine, young,
sensitive guitarist."

Jonathan has been a featured soloist with the Young Musicians Foundation Debut
Orchestra for the 2006 Elmer Bernstein Tribute Concert and the Pepperdine University
Orchestra in both 2005 and 2006. He was a guest performer at the 2005 Santa Monica
Bay Keepers Annual Beach Ball hosted by David Foster whose guest of honor was
California Governor Arnold Schwarzenegger. Other accomplishments include the
Pepperdine University Fine Arts Division Outstanding Graduate and Service award and
induction into Pi Kappa Lambda.

Jonathan is also a composer and his debut album Meditations (2005) has been broadcast nationwide. His works Crimson and Grace were recorded by Brandon Louis Jones (Enlightenment, 2004) and Thank You was recently tracked by Brandon Dyke (Timeless Moments, 2008). Jonathan's second album Nostalgia is set to be released in early December 2008.