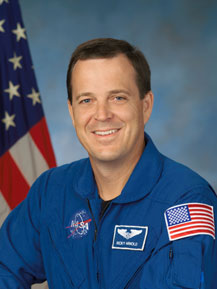 "An Evening with Astronaut Richard Arnold"

Astronaut Richard Arnold flew aboard the STS-119 Discovery from March 15 to March 28, 2009. This was the 125th shuttle flight, the 36th flight of Discovery, and the 28th shuttle flight to the International Space Station. During this mission, Arnold accumulated 12 hours and 34 minutes of extravehicular activity during two spacewalks. When Discovery landed it had traveled 202 orbits and 5.3 million miles in almost 13 days. Previously Arnold served on a joint mission between NASA and the National Oceanic and Atmospheric Administration, NEEMO 13 (NASA Extreme Environment Mission Objectives), where he lived and worked in and around Aquarius, the world's only undersea laboratory. Before joining NASA, Arnold taught middle school science in Maryland, following teaching jobs in Morocco, Saudi Arabia, Indonesia, and Romania. Arnold holds a BS from Frostburg State University and an MS from the University of Maryland. He is also a proud Pepperdine parent.