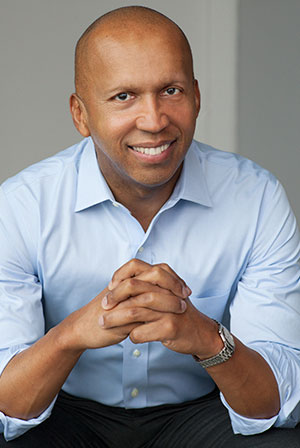 Bryan Stevenson is the founder and Executive Director of the Equal Justice Initiative and one of the most acclaimed and respected lawyers in the nation. His memoir, Just Mercy, is the story of a young lawyer fighting on the frontlines of a country in thrall to extreme punishments and careless justice. It is an inspiring story of unbreakable humanity in the most desperate circumstances, and a powerful indictment of our broken justice system and the twisted values that allow it to continue.  Nobel Peace Laureate Desmond Tutu has called Stevenson "America's young Nelson Mandela."

His work on individual cases has generated national attention and his efforts have reversed death penalties for dozens of condemned prisoners. Stevenson's remarkable twenty-minute TED Talk on the subject of injustice has been viewed 1.25 million times on the TED website and another 150k times on YouTube; The New Yorker named it one of five essential TED Talks.

After graduating from Harvard Law School in 1985, Stevenson moved to the South: the states were speeding up executions, but many of the condemned lacked anyone to represent them. On a shoestring budget he started the Equal Justice Initiative. The cases he took on would change Stevenson's life and transform his understanding of justice and mercy forever. Stevenson is the recipient of numerous awards, including the MacArthur Foundation "Genius" Grant and the NAACP Image Award for Best Non-Fiction, and was named one of Time's 100 Most Influential People for 2015. Stevenson is a tenured law professor at New York University School of Law.

For more information on this speaker please visit www.prhspeakers.com.