"The Moral Life of Downtown: Bringing the Humanities to the Poor" 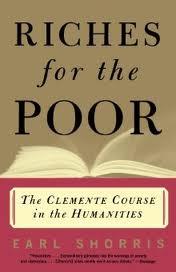 Earl Shorris is founder and chairman of the advisory board of the Clemente Course in the Humanities, a college-level course in the humanities for people living in poverty. Educated at the University of Chicago in the classics-based curriculum designed by Robert Maynard Hutchins, Shorris has had a distinguished career as a journalist, social critic, lecturer, and novelist. His articles and reviews have appeared in Harper's Magazine, where he has been a contributing editor since 1972, as well as in The Atlantic Monthly, The Nation, and many other publications. Among his nonfiction books are The Death of the Great Spirit, Latinos: A Biography of a People, New American Blues: A Journey Through Poverty to Democracy, Riches for the Poor: The Clemente Course in the Humanities, and the forthcoming The Moral Life of Downtown: Bringing the Humanities to the Poor. While doing research for New American Blues, Shorris had the conversation that inspired the Clemente Course. He described the first year of the course in the October 1997 issue of Harper's. Now administered by Bard College and in its fifth year, The Clemente Course is currently being taught at 17 sites in the United States, Canada, Mexico, and France.